Over in the shop we are running a preorder for the CNC conversion kit. Here we would like to give you a bit of background on how it all came about and our design intent.

From day 1 of ordering the EMV-25VBB milling machines, the CNC conversion kit was always going to be an option we would offer. As the development reaches commercialisation and release, let us give you a bit of background on how we designed and thought the project through.

The first conversion our team did involved a Chester Machine tools Super lux. At the time, we were short of cash and also wanted to get the machine running asap. This was not a good combination as corners were cut, money was skimped with the end result...well much to be desired. Thanks to that machine one of us learnt to hand scrape for flatness and alignment as well and owns more metrology tools than we would need, a Biax powerscraper and a granite table.

The following learning outcomes have stayed with us as we designed the conversion kit for the EMV-25VBB:

Servos are so much better but Steppers can be good

Granted there is a cost to servos and there is also a learning curve regarding PID position control and parameter tuning. Thankfully Clearpath servos are here to save the day! Plenty of YouTube videos to prove why, including John Sanders’ special projects! Thankfully for those with a limited budget, the option of using steppers is not eliminated due to the servo motors we will ultimately inlcude are also Nema 23 frame sizes. The added bonus of the servo is that you can back drive it much easier than a stepper. Our protoype kit sports steppers, because that is what we had at the time 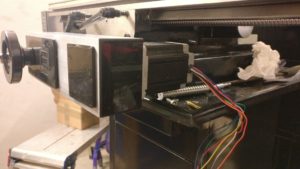 Invariably the castings used on the machines we are aiming this kit to are not aged or stress relieved. In some cases they are not even ground well enough. On our Chester we found that even drilling lubrication points was a bad idea as the saddles would move killing the accuracy we hand scraped into them. So great effort has been expended to get a custom made ballnut and ballscrew mount to allow fitment of the X-axis screw. In fact we even use the same screws from the factory in most case. No more hunting around for a mate with a Bridgeport! 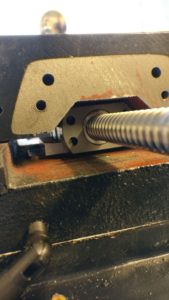 Yes you read that right, no too ways about it. Yeah you can use the CNC controllers backlash compensation function but why not just eliminate it from the getgo? We came to this conclusion about 3 months after we put the first machine together. Kept chasing repeatability, squared off circles and steps in all directions. So ditch the silly ideas of springs between the nuts, shims etc and go with quality precision manufactured ballscrews and bearings throughout.

Hence our kit is based on C5 accuracy ground and preloaded ballscrews. They are so good they can be backdriven! 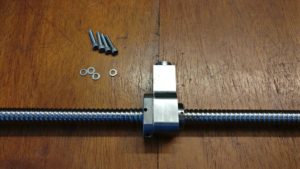 Wish I had kept the handles

Why code a a hole drilling program if you only want to do a quick job? Not going to eliminate the quill too right? So yeah, jogging with a keyboard is impractical and for the one quick hole you want to make using that drill you cannot really be bothered to touch off…Lets keep the handles on. Oh but wait, what happens when the handles are spinning with the motors? Best make them the safety kind. 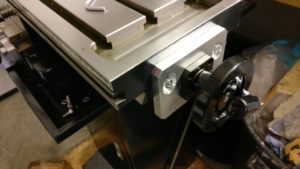 In order to eliminate backlash and lost motion, we have made the ballnut mounts out of steel. As you may already know the coupling between the casting and the nut occurs through a boss and it is held in place with a single screw. Using steel we know that the parts will last a long time with no loss of rigidity.

What machines will this fit on?

The kit came about with some help from Aaron Powter of Youtube fame. He designed his kits to fit the Titan machine tools, available in Australia. His kit fits the AMAT25LV, the Optimum BF20, HBM BF25 and other machines too. The biggest difference between the EMV-25VBB and the other mills is the end of the table. Ours takes a small flange that does not cover the ends of the T-Slot area, while the others have a larger plate. To keep all of your covered we have designed both variants.

How do we get this kit?

Getting the numbers up is critical in being able to make this viable. Unlike the other kits available, we have put great effort to ensure it is as plug and play as possible, this has built in the complexity of needing special ballnuts and holders. So, we are asking that our customers head on over to the shop area and preorder their kits. This commitment keeps you keen and us on track. Think of it like crowdfunding.

Head on over now to see the rest of the photos!

Following on the theme of top printers, we are excited to be working with Craftunique from Hungary! EmvioENG is an official UK partner, importing, distributing, selling and servicing the Craftbot range of machine!
The Craftbot printer range has, this year, won 2 awards issued by 3DHubs.com 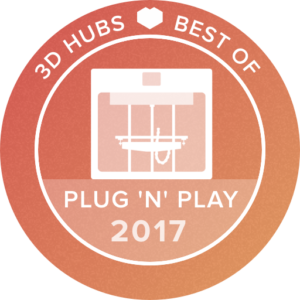 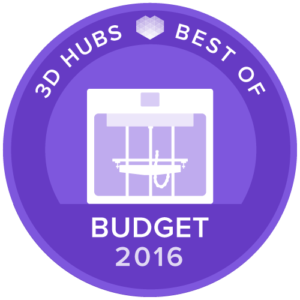 We met the CraftUnique team at TCT in 2016 and have since started importing the Craftbots to the  UK. Of particular interest to us has been the Craftbot 2 and Craftbot XL as they are now fully updated with the latest nice-to-haves anyone would like.

Both machines have a very solid build. Steel chassis, Linear rails on the XL and all metal construction throughout. Oh and whats more, you can also specify the colour of the machine you would like! We have the blue one but the anthracite colours are really good too.

Get in touch if you would like to become a reseller

George2018-10-15T14:30:03+01:00
The big news of the week is that we are now the UK and Ireland exclusive distributors to all the Bondtech products. Bondtech extruders have understandably revolutionised the reliability and speed of printing using filaments. The team have a series of mounts to allow adapting the parts to any prosumer quality printer that are freely available from us or from Bondtech directly. END_OF_DOCUMENT_TOKEN_TO_BE_REPLACED
By GeorgeUncategorised0 CommentsRead more...