Drawbar tension for R8 and MT3 collets to work safely with QTC tooling?

Drawbar tension for R8 and MT3 collets to work safely with QTC tooling?

We have been asked on a number of occasions, and seen in a number of forums, the question of “How much tension should I put on my drawbar when I use  Emvio (or Tormach) repeatable Z tooling?” This question is a very common for those looking to make a pneumatically actuated drawbar using Belville washers. So what do you need to know about Drawbar Tension?

Tormach, in their white paper did some good work to give people a starting point at 2500lbf. This equates to 11120.55N for those that are into proper units.

Here I would like to explain to the prospective CNC maker why this number is a good starting point, how much potential clamping force on the tool you can expect and what issues you may face if you do not balance your loads and frictions.

We all know that by applying a tension on the drawbar, you will be pulling the R8 or Morse taper collet into the spindle and as it travels in, the tapered sections of the two will create a clamping force on whatever is inside the collet. The theory we will use to find the various forces involved is the typical high school problem of a body on an incline with sliding friction. 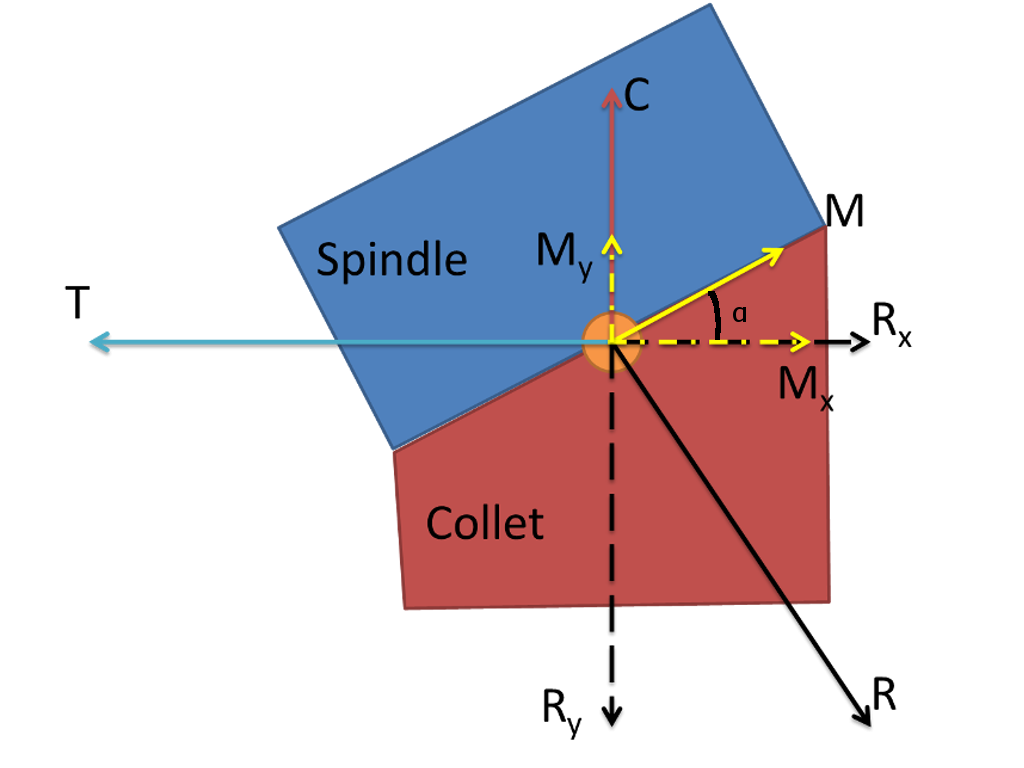 In our figure, you can see physical meaning of each of the vectors shown in the free body diagram. The collet taper angle is α, T is the drawbar tension, R is the reaction of the collet on the spindle, C is the clamping force  and friction along the taper is M. M is equal to the normal reaction R multiplied by a coefficient of friction μ.

The force we need to focus on is the reaction of the spindle taper onto the collet taper R. This reaction is actually significantly larger than one would normally expect. It all comes down to equilibrium of forces in the two principle axes: X that I will define along the axis of the draw bar and Y the direction of the clamping force.

The sum of forces along both axes must equal to zero in order for equilibrium to hold. So along the X axis we have the drawbar tension T, and in the opposite direction, the component of the taper reaction along the X axis Rx and friction Mx. Friction always acts along a vector perpendicular to that of the reaction force hence the need to resolve it along the principle axes.

Similarly along the y axis, we have the the component of the reaction in the Y direction Ry, a friction component My and the clamping force in the opposite direction.

The clamping force will then in turn give rise to the force required to pull an endmill or tool holder out by means of friction.

Here is my hand working of the various equations: 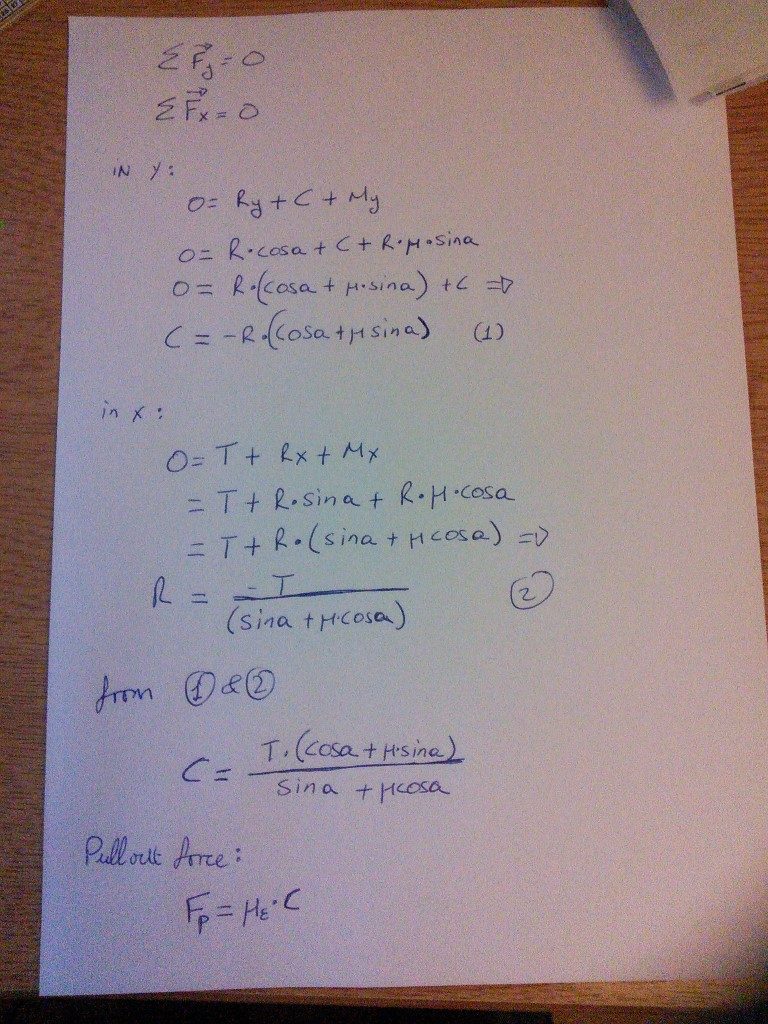 Literature commonly states that a smooth and clean (no oils) metal to metal any coefficient of friction can vary from 0.1-0.3. As soon as oil or lube comes into the equation, this can drop to 0.08. These CoF’s are important to what we are looking to achieve. Friction in the collet/spindle interface will reduce the clamping force, where we want to have as much friction as possible.

This is not safe for decent sized machines!

2500lbf will in turn give a pullout force of 1500lbf which is much better.

The single most important factor to increase the clamping force is the reduction of the coefficient of friction between the R8 or MT3 collet and the spindle. This however will need to be balanced against the friction required to ensure that torque may be effectively transmitted to the cutting tool. That is a topic for another day though.

In the next instalment I will discuss the use of Belville washer to achieve a good tension on the drawbar. Those looking to make their own ATC stay tuned. 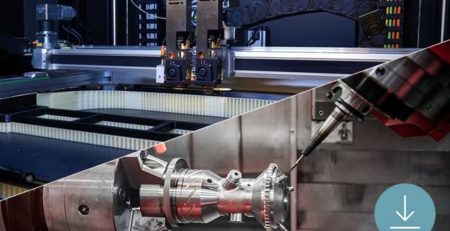 We have always said that additive and traditional methods of manufacturing are complementary.  As with everything in life, the best... read more 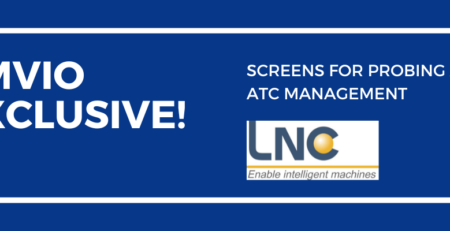 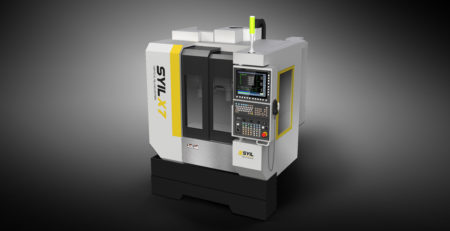 We realise that there are not many higher end SYIL CNC machines available in the UK. We also know that... read more

Some would say that finally there is a CAD/CAM package that is suitable for the small/medium enterprises that are looking... read more

If you want to see how it's done, look no further... (more…) read more 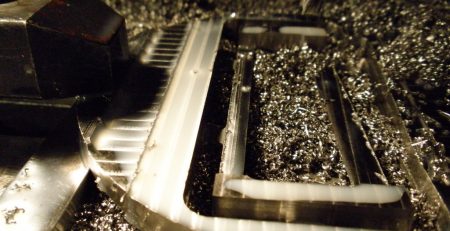 This month we were approached by Eagleisystems Ltd of Dundee to assist in the design and prototyping of brackets that... read more 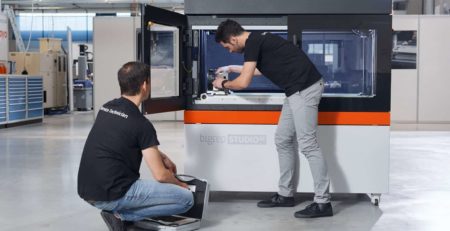 6 Things To Consider When Buying A Large Format 3D Printer

There are several factors to consider before purchasing a large format 3D printer, like a BigRep. Choosing your 3D printer isn't... read more 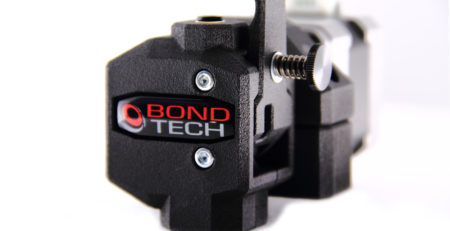 Since early July, we have a had a very successful working relationship with Bondtech, the Swedish company producing Dual Drive... read more

In additive manufacturing, if you want to succeed, then you need high speeds. The crucial question remains: how can you... read more